Is Being Called a  "Patent Troll"  Defamatory? 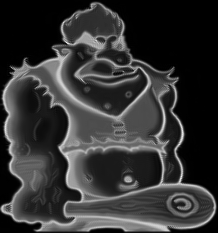 against Banks & Credit Unions to find out 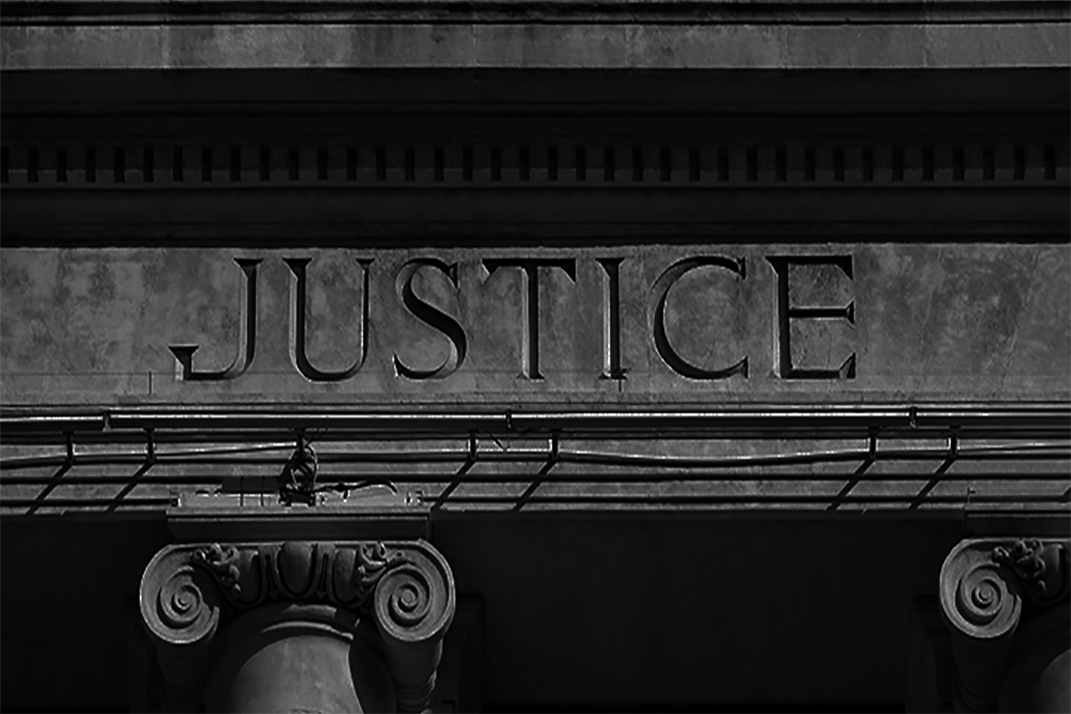 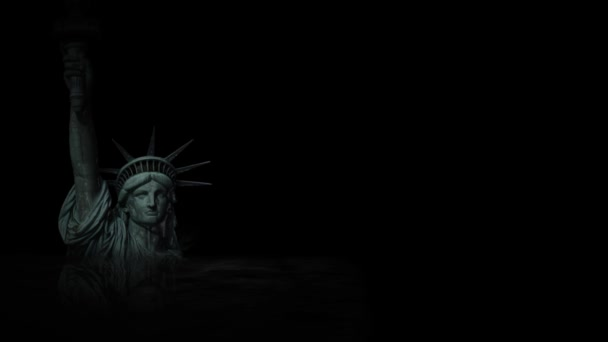 For the better part of the nearly 250 years of the existence of the United States of America the U.S. patent system has been one in which inventors could be reasonably sure that their private property rights covering technological innovation would be protected and enforced.

Giants of American innovation like Alexander Graham Bell, Thomas Alva Edison and others not only successfully commercialized their patented inventions, they also protected their competitive advantages by taking patent infringing parties to court.

What happened to that illustrious history?

Constitutionally protected private property rights have been under assault for more than a decade. Over these past 10 years,

an insidious narrative regarding Patent Trolls...

has been allowed to infiltrate the U.S. patent system, a system which currently ranks 10th, 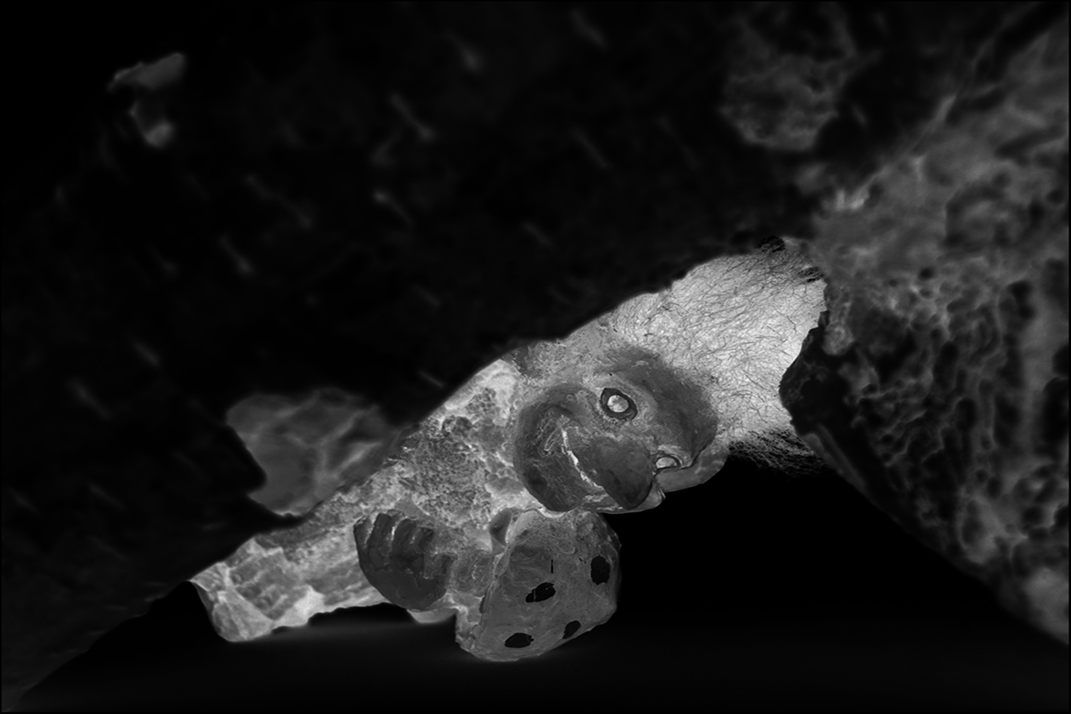 Funded by a collection of powerful interests such as The Federal Reserve System, the financial sector has become the largest source of reelection dollars than any other industry.

There’s a reason why books like The Creature from Jekyll Island resonate so strongly among those who are suspicious of nationalized financial systems. 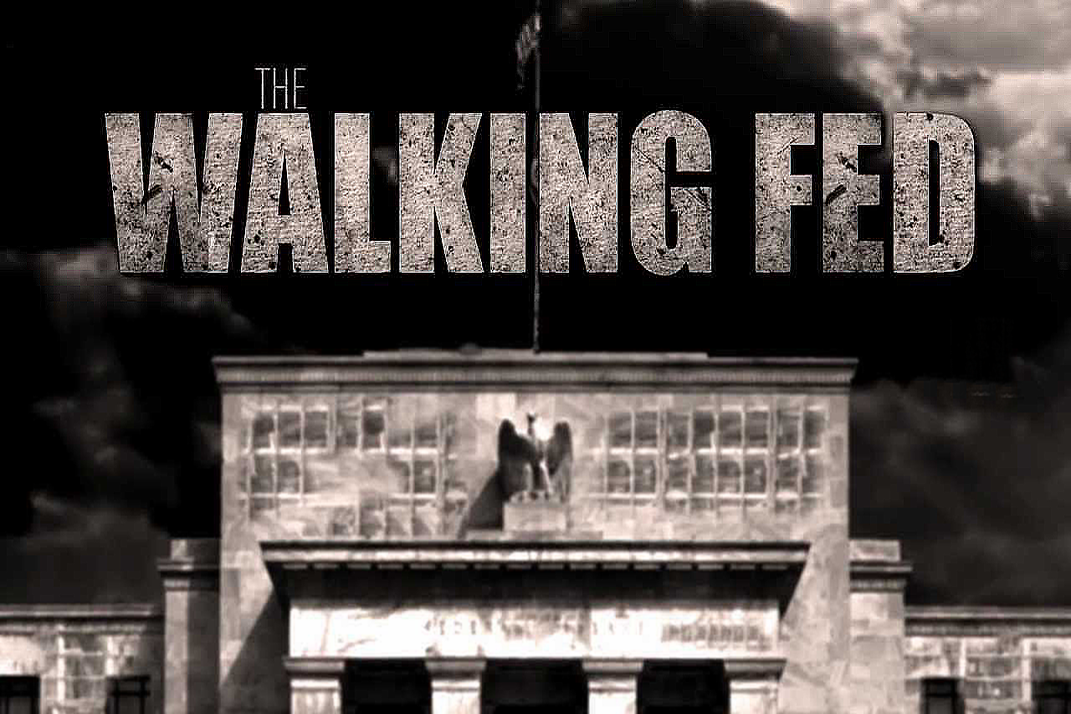 The companies purchasing patents are known as patent assertion entities (PAEs) — although they are often disparagingly referred to as "Patent Trolls." Because of the complexity of patent law, the loose descriptions used in some patents, and the high cost of patent litigation, many businesses settle these claims even though the claims may be without merit. Financial institutions have increasingly been targeted. For example, Automated Transactions LLC (ATL), a PAE, has sued more than 60 banks (many of them community banks) for violating a patent covering automated teller machines that ATL licenses from the inventor. 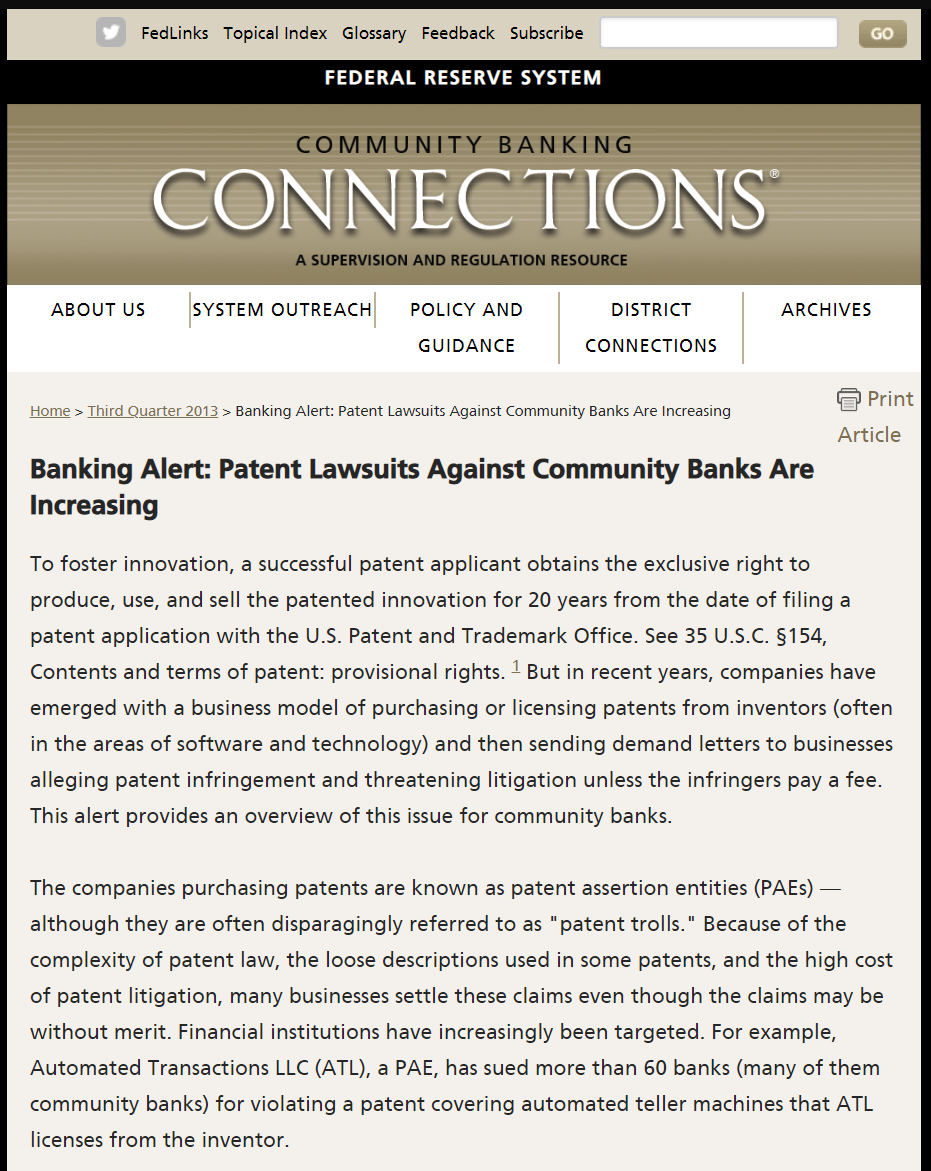 and Promoting Innovation by

“one of the most powerful lobbying groups on Capitol Hill,”and the organization has spent more than $8 million per year for lobbying in all but 2008 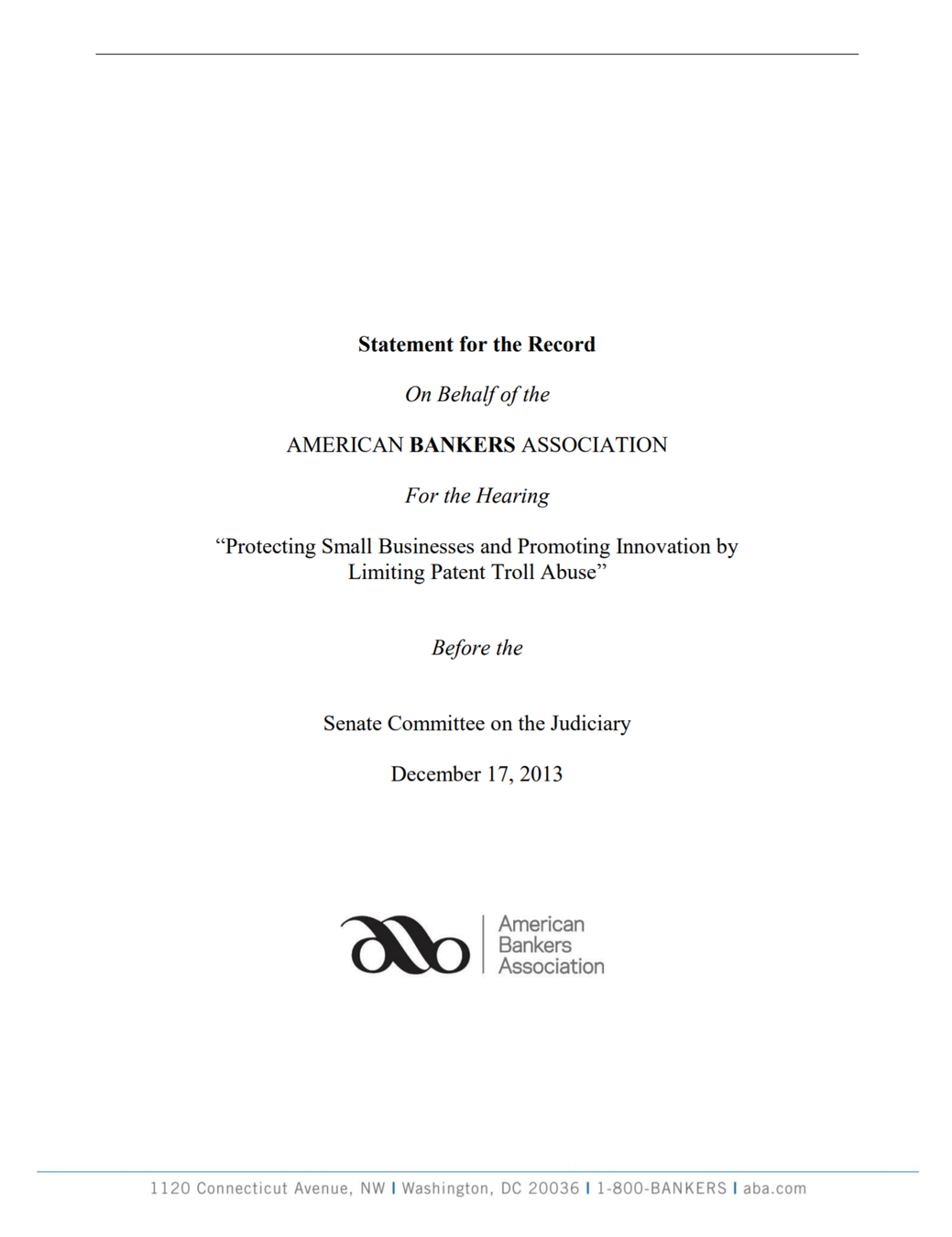 Several hundred financial institutions paid over $1.3 billion to thousands of lobbyists; an average of more than five lobbyists per member of Congress , to push legislation.

All the while, patent owners have had to stomach the deleterious effects of Congressional acts like the America Invents Act (AIA) of 2011 and various U.S. Supreme Court decisions.

Executive Branch decisions, like former President Obama’s decision to appoint the head of patents at Google to lead the US Patent Office, the office Google's been actively damaging? 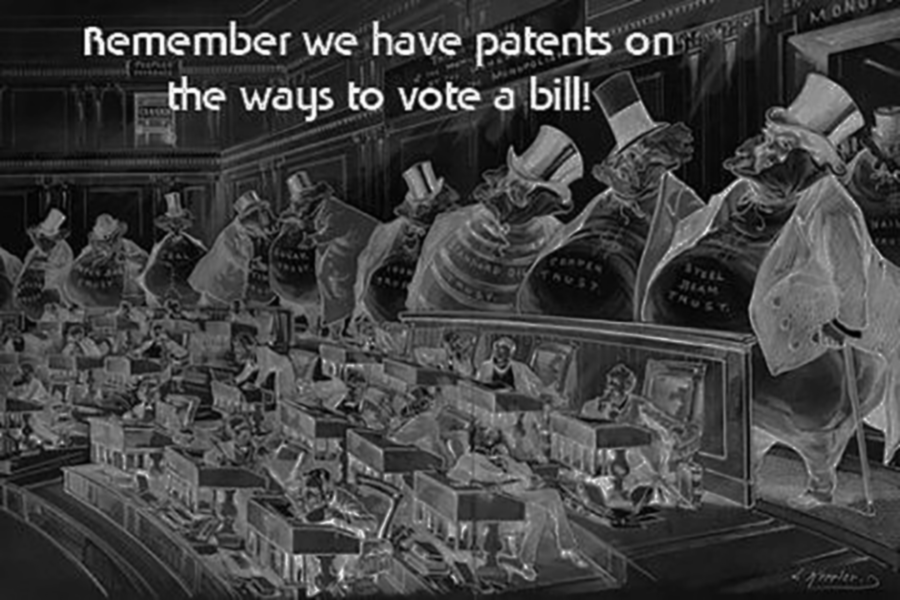 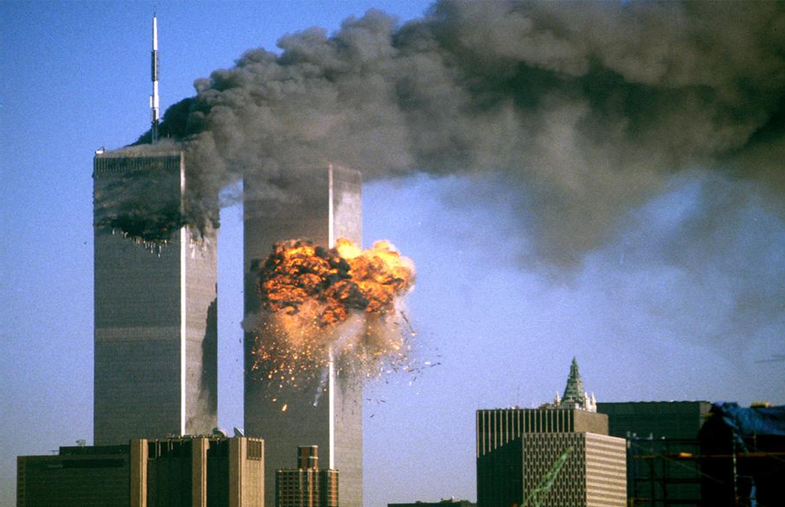 In a multi-part series to be published on this website, readers will follow a self-made inventor who combined several unique technologies into a manufacturable product when, all of a sudden, the devastating events of 9/11 destroyed his business plan to deploy 8TM™/ATM's into NYC.

Shortly thereafter, a similar Vcom™ product was rolled out by 7-Eleven, but there was nothing he could do about it. Dave's 1996 patent application containing nearly

sat languishing at the Patent Office, being examined... for a decade.

The story of Dave Barcelou and his company, Automated Transactions LLC, should be a very cautionary tale for anyone who still believes that owning a patented invention leads to financial success, even when the technology is widely adopted by a array of big businesses.

Barcelou enforced his patents in the Courts, winning a high 'six-figure' settlement from the largest bank in Buffalo, N.Y., known then as First Niagara [now as Key Bank], when a veritable 'Who’s Who' of financial services industry leaders combined forces to destroy Barcelou and his company economically. 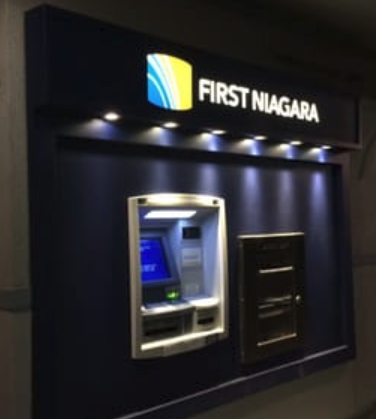 Besides encouraging one another to ignore Automated Transaction’s demand letters, false and misleading statements started to appear in prominent business publications...

Over time a unified battle cry arose from the "poor little community banks"...

“ He’s nothing but a Patent Troll " 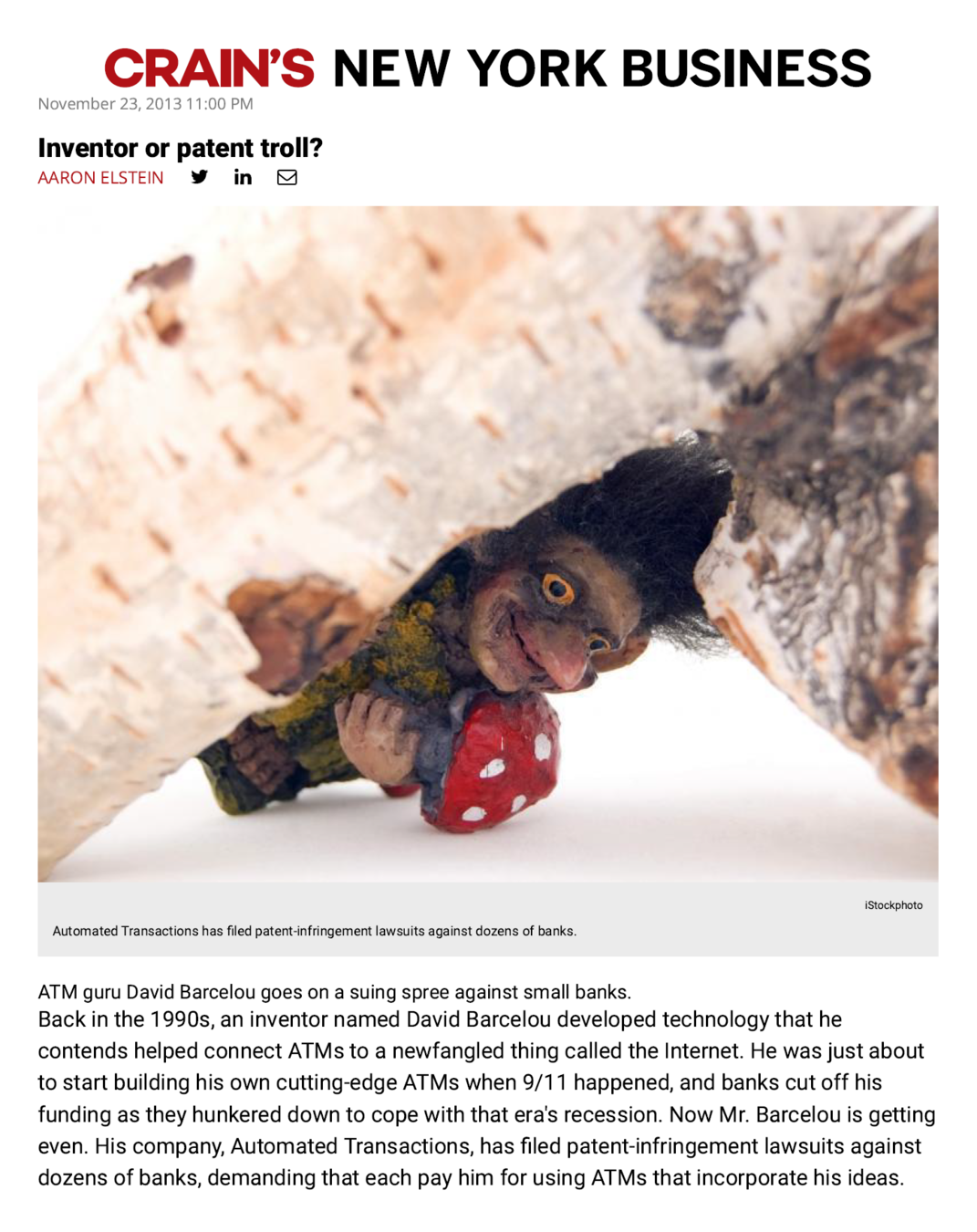 decided to fight back.

the crème de la crème of those 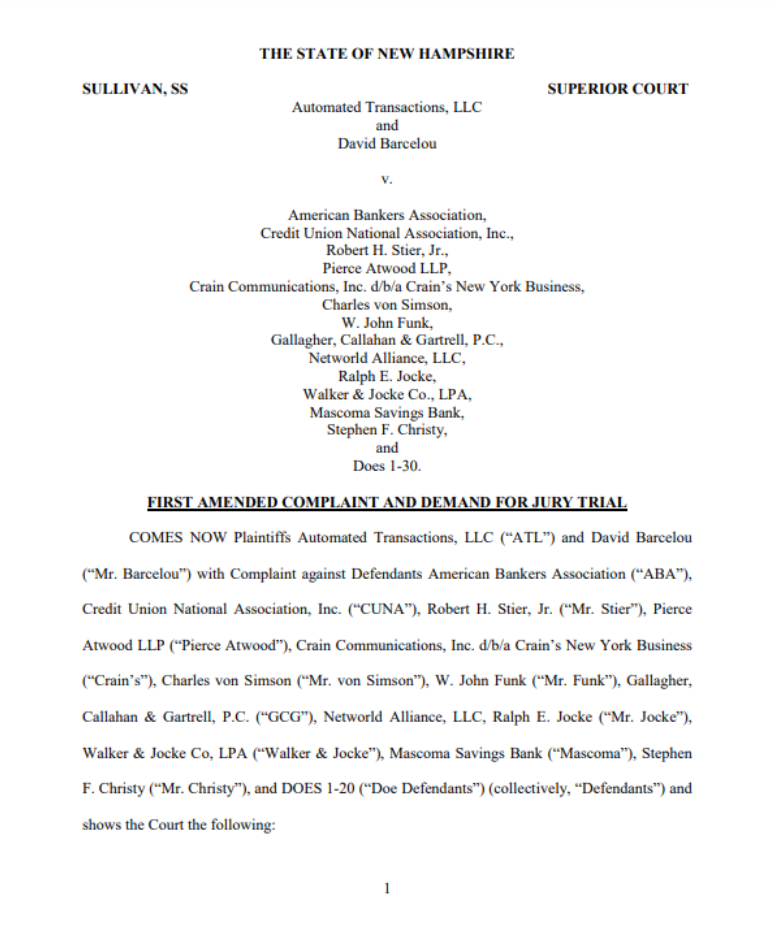 The metaphor of David and Goliath from the Biblical Old Testament’s First Book of Samuel may be overused, and in many cases it is, but, there are some unique parallels which we’ll note as the series draws on. Dave Barcelou is walking into a battle over property rights, just as the Israelite shepard boy David did in his famous battle with Goliath. 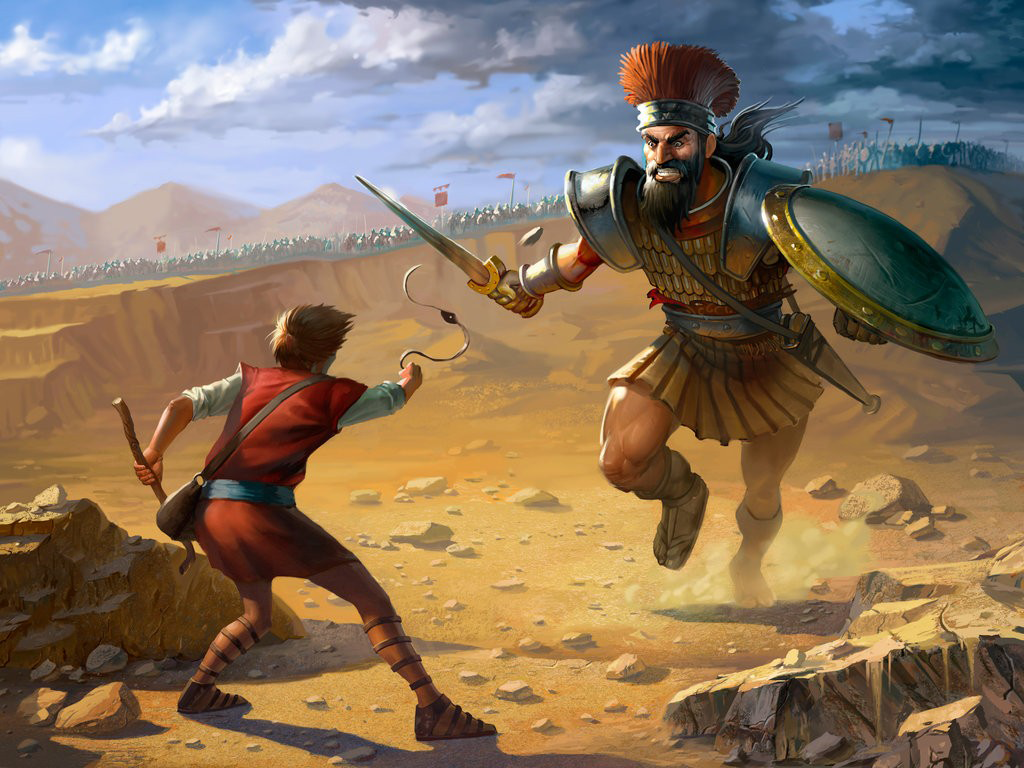 The Federal Reserve is a much more powerful opponent than Goliath could ever be. In fact, it is an entity whose armor so blinds them they can’t fight properly; they can only hurl insults like 'Patent Troll' in the face of Dave’s legitimate Constitutional property rights. Whether or not his case is able to destroy the empty, insulting, pejorative ‘Patent Troll’ narrative with the slinging of a single stone (or, in this case, defamation suit), the battle lines have been drawn in a way which should give many patent owners reason to pay close attention to this New England case. 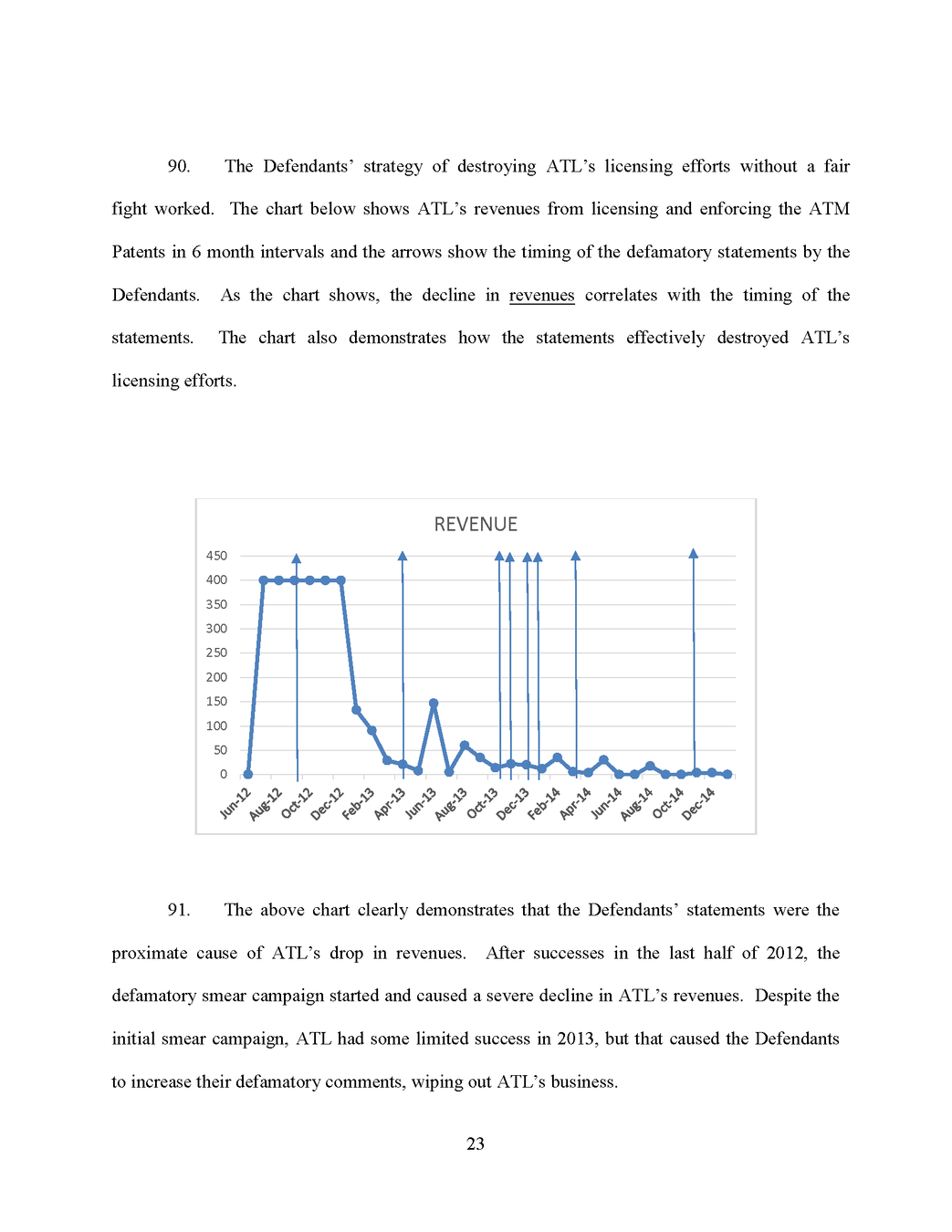 The chart on the left clearly shows the decline in revenues correlates with the Defendants' statements.

Automated Transaction's downturn in revenue, despite 2013's limited success, was the result of a conspiratorial

His situation, now spanning more than two decades, is one small inventors' may find themselves in    (if they haven’t already).

Dave Barcelou’s story is a classic example of the horrors that await self-made inventors who also ​happen to be patent owners facing powerful business interests.

Dave owned  dozens of valid and enforceable patents and armed with a track record of having invented arguably the greatest arcade game ever, entrepreneurs' across America should imagine themselves in the middle of a libelous story like this. 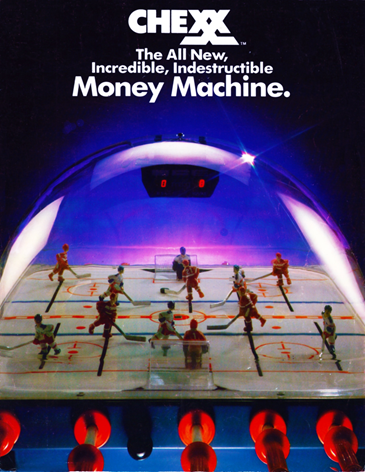 Click the image above to listen to an archived version of the hearing. 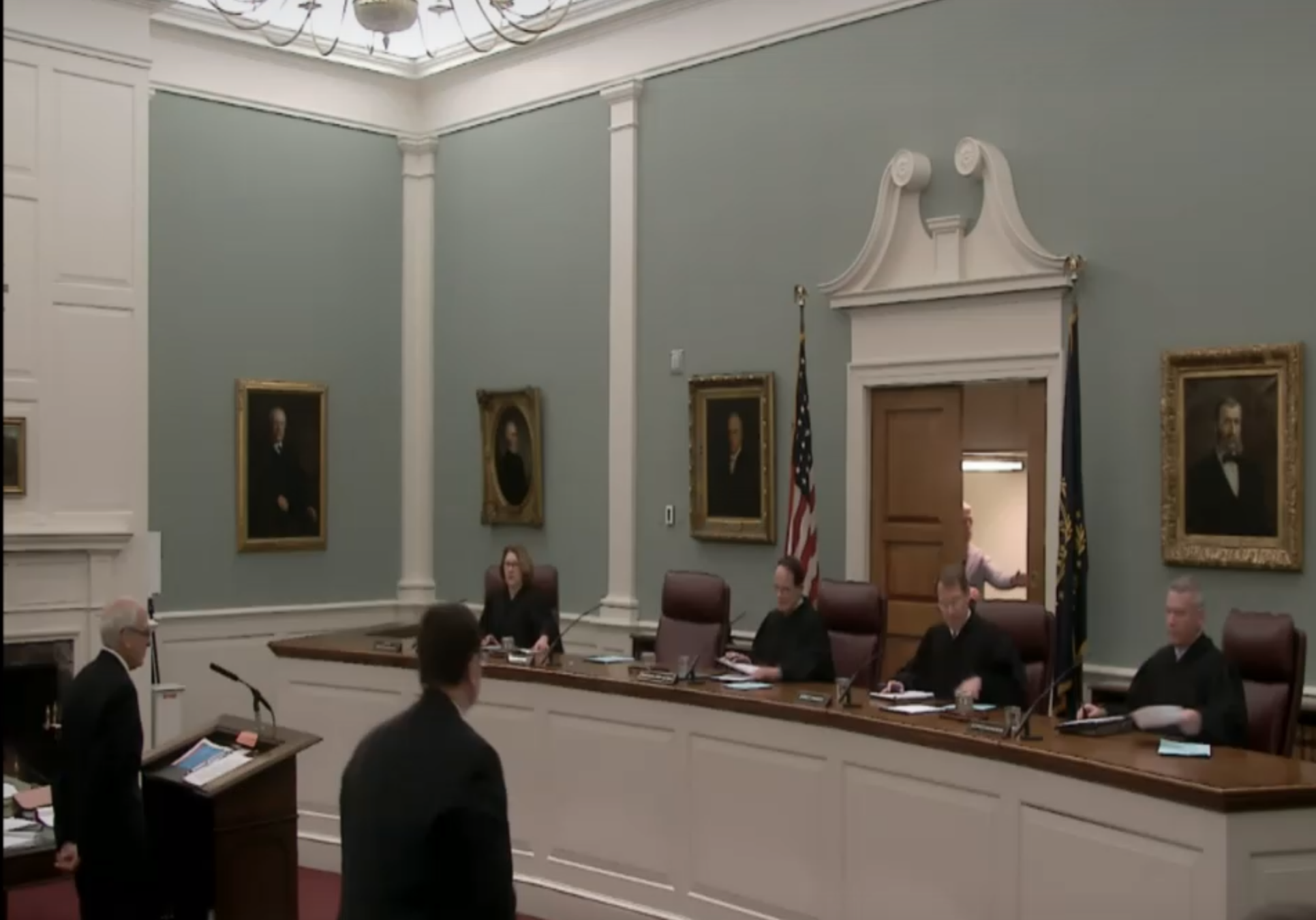